I'm in Roatan, Honduras since a few months now, waiting for the low-season to end and start to work as a scuba-diving instructor. There's not much to do around here, so I played Morrowind a bit. And of course I had to port of few things of mine from Oblivion, a backward thing if you will...

Anyway, after a while, I grew bored with some mods I have installed for Morrowind, and started to patch them, and slowly add some stuff, and then more stuff, and more. Up to a point where I made a considerable amount of crap, and decided to evolve it into something...bigger.

So far I ported some things of WAC into Morrowind, changing it and adapting where I can. Of course I cannot use anything that is directly from Oblivion like the modified creatures models I made for WAC, but in my opinion many of the things I did for it like the textures of the creatures where pretty much new stuff.

For instance, the big cats of WAC; the textures I made for them where like 98% changed. So I took what creature in Morrowind could suit a feline most - in this case the wolf from Bloodmoon, and changed the model, made a few new heads animations, and slapped most of the WAC big cat textures on that with a little changes here and there to account for the new UV I created. It work. Mostly.

The nature of Morrowind being different from Oblivion I won't be making as much beasts as I did for WAC. Yet I'm slowly working on different stuff that start to look promising in my opinion.

I will post a few example pics of what I got later-on, but lets say that for now there is:

- Most Big cats from WAC in a new form.
- RealSwords Dunmer is in. (I won't be porting the whole of RealSwords. Only what I like most) I mourn the loss of my scabbards a lot.
- Many of WAC deer species.
-Placing daggers and bags on the belts or many cuirass, outifts, and all robes.
...

on the new side:

- An array of bandits outfits and armours. 168 armour parts & more. (they look far better and there's much more than what I made for Oblivion)
- A new Warg model, (also look wayyyy better than my Oblivion one). Also re-texture and model adjustment of the Bloodmoon wolves.
- A playable Gnoll race, based on my Oblivion Gnolls
- A Wyvern thing based on the cliffracers, but it look more like a dragon.

- And goblins. Lets start with what I'm currently on at the moment... Left is Vanilla Morrowind (Tribunal) goblin, right is mine.
Notice the helm that my goblin is wearing, it's inspired by the one used by Oblivion's goblins... I remade it from scratch. Funny thing is that what I'm doing now look a lot more polished than the Oblivion stuff I made. I take it slow, instead of fast with high volume. And also most of what I do now are either completely new of so heavily modified that it's not the same thing anymore.
Like this Goblin. The head is a new custom model, and the body have been remapped and I hand painted all new textures from scratch also. I started by doing the gobs from the base, I made the model 00 completely naked safe a loincloth. This is the first armoured version. 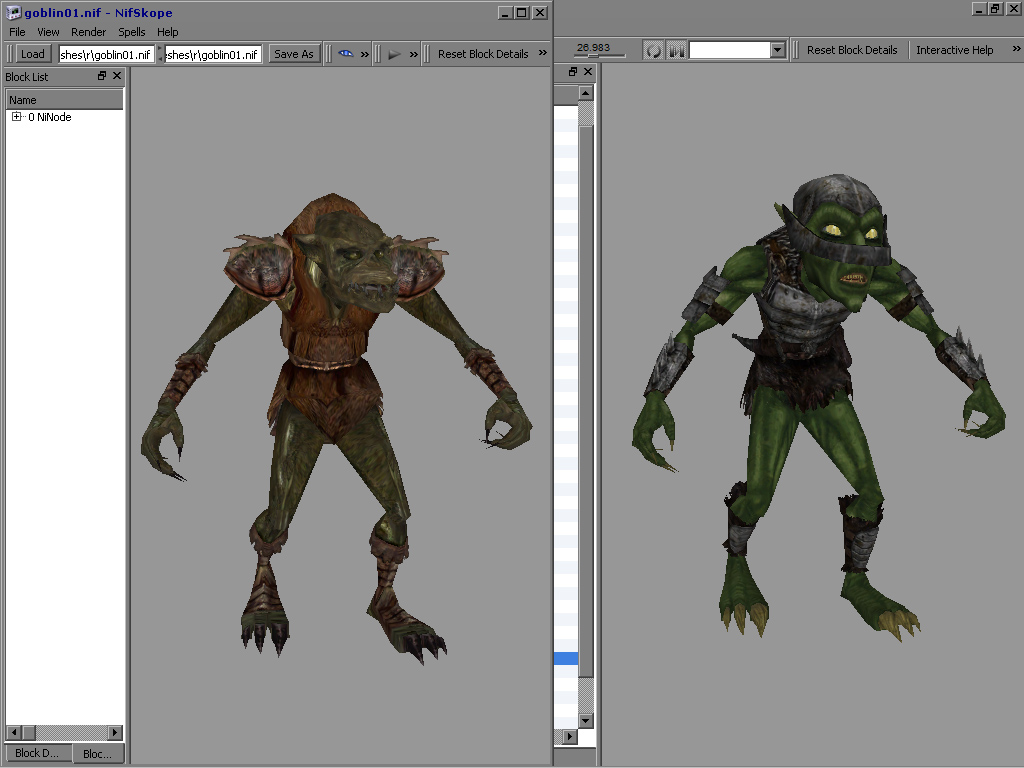 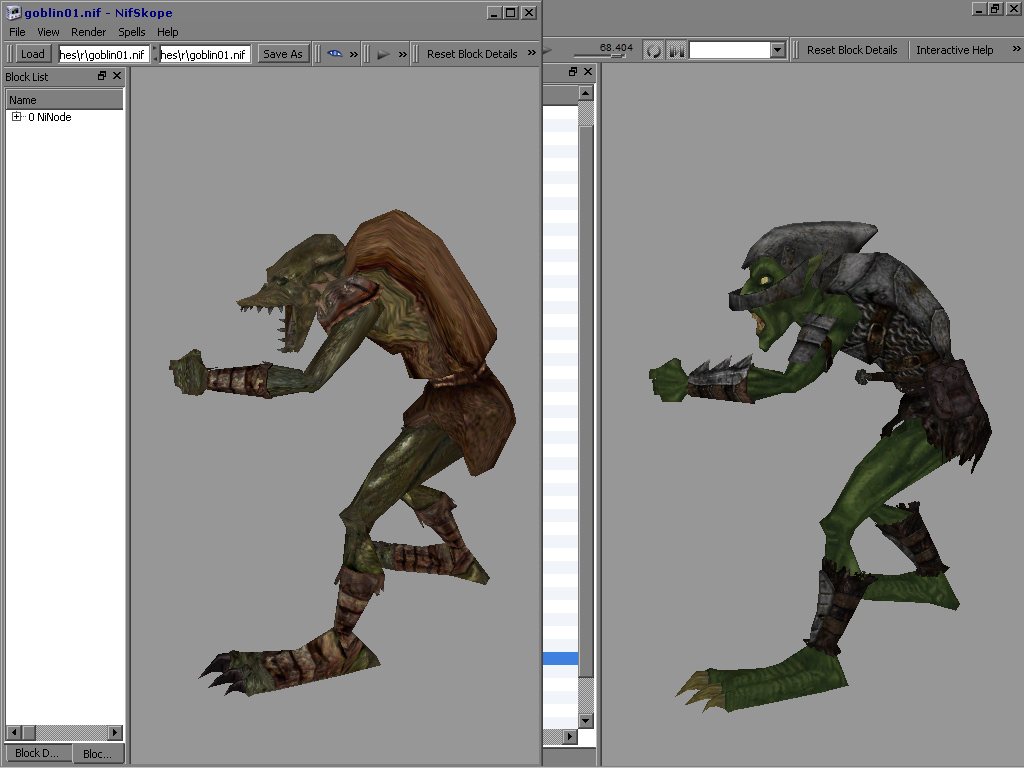 That's the creep I was on lately. I'm not sure who he is yet, a Beserker maybe. It's not completely finished.

Hoppefully this can be of interest to someone...That's it for a start.

Another batch of pics...

The bandits so far wearing most of what I created, some of it is not displayed on this.

Some of the Wyverns:

And some examples of the cats I brought in:

This is the goblin head model, with a few variations on the second row. Of course, as in WAC for Oblivion there will be many different heads on the goblins. 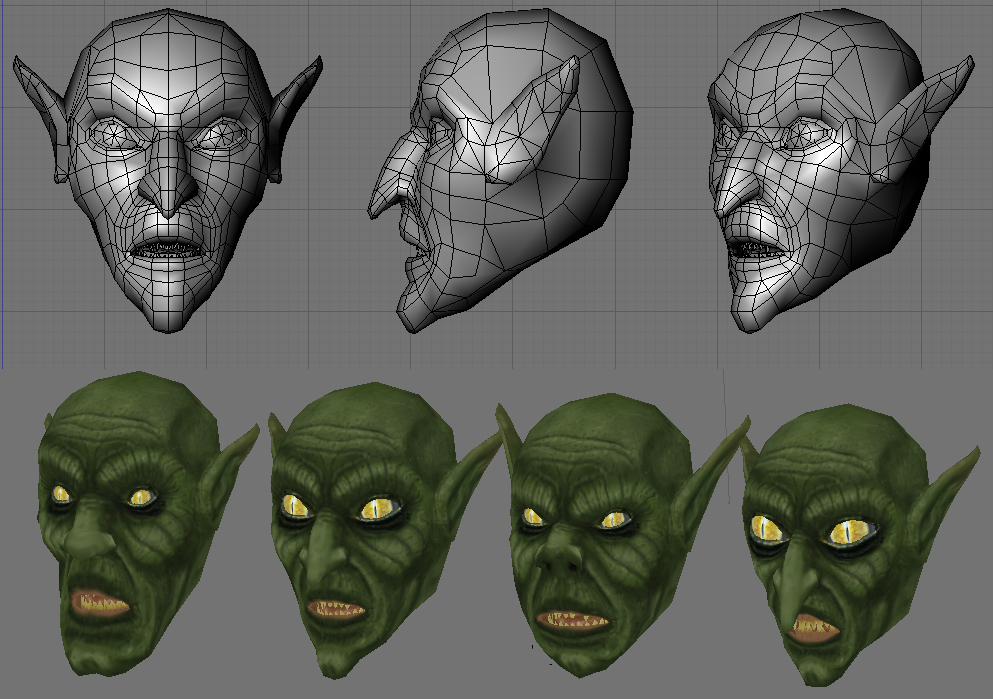 The goblin helms I have so far. The 3 on the left are loosely inspired by LOTR movies orc/goblin stuff. 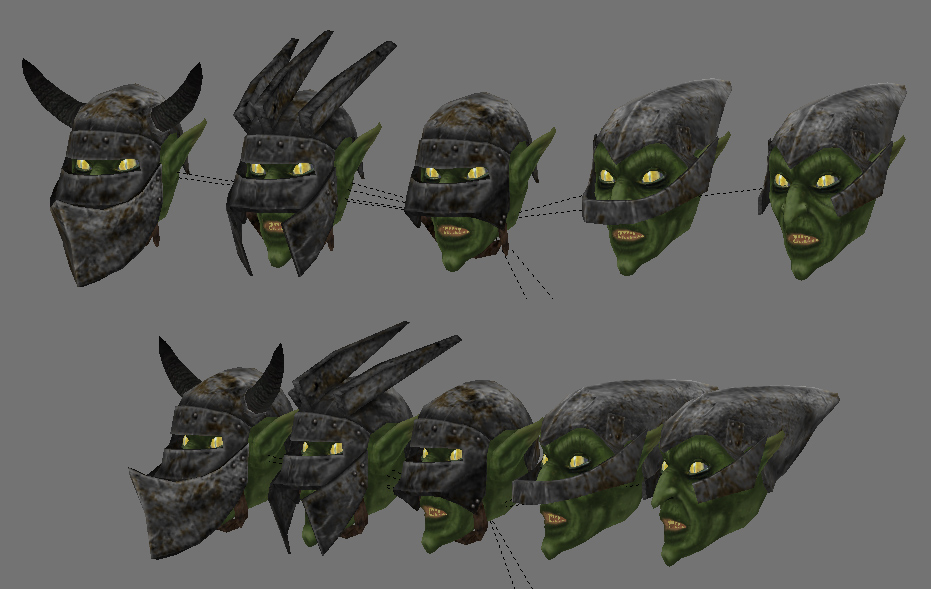 Thanks man. I'm going to work more on it for a while and then release a first version like what I was doing for Oblivion. Don't know when though.

The best piece of advice I could give is do not release until you are happy with it. All too often I see things great in concept and poor in execution, which I feel happens because something is rushed. If you have questions or need help on how to do something please feel free to ask.
Phenom II X4 965 3400Mhz quad core, dual Radeon HD 5800s with 1024MB GDDR5 Ram, 16GB Ram, dual Samsung SyncMaster PX2370 led monitors, Win 7 Pro 64bit
My Mods on GHF Downloads
Morrowind Modding History
Using Tes3cmd to clean plugins the easy way
Top

Hola Man I see you are having fun again. Great stuff!!!Glad to read you again. Who knows you might work on Skyrim one day.

As soon as I re-built my computer...(sometimes in décemember) I'll make sure I try the WAC-ME as well.

Again nice to read from you...

I was very surprised.

Welcome back, Waalx.
I am glad to be seen your new work.

Here's another comp shot with different armor sets for the goblins:

To skyrim it, you will make it reborn
Top

Nice selection on the heads

The forehead are texture based, and there is not enough poly in that area of my model to create real wrinkles. They are painted.

The eyes are varied somehow... they don't have the same size, some are more slanted, and one have googly eyes.

anyway that's not going to matter much when playing. You won't say hey look they have the same foreheads. Because they will move and attack you, it's not as it they where NPC that you can stand in front and analyse. Also many will wear helmets so no foreheads visible.

As for the eyes, same thing except tha they will glow bright green, so minor differences is enough, more isn't necessary. When in movement you won't notice that either I'm pretty sure.

for the tips though

Waalx, you just made me a happy man

You know, the other day (two or three weeks ago) I thought, there should be something like WAC for Morrowind. Not that there aren't any great mods for Morrowind but not in such a complete way. And finding your post on Nexus was like my Birthday, Christmas, Easter and lot's of other holidays at the same time.

Are the armor and clothing meshes based on Better Bodies? It's a well accepted community standard and at least far better than the original bodie meshes (and textures), so it would make sense.

Wishing you all the best! Thanks a lot (even for trying).
Top

Are the armor and clothing meshes based on Better Bodies? It's a well accepted community standard and at least far better than the original bodie meshes (and textures).

Wishing you all the best! Thanks a lot (even for trying).

Remember that WAC-ME will not be as extensive as WAC for Oblivion though. It's going to be much smaller and cover less. Morrowind being a wasteland and all, there won't be as many creatures as there was, I'm going to concentrate on fewer stuff, but trying to bring it to a better standard of quality than my Oblivion work.

That being said, I will do what can at this time to d something cool

As for the armor and clothing, yes they are based on better bodies system. I wouldn't even think of doing stuff for the vanilla models, they were horrible... The armors and clothes and robes are based on Better Clothes, and Better Armors, and Better Robes (which just came out lately. I made hoods for almost all robes, and most mages in the guilds wear one.

Well, that sounds perfectly right. In fact, Morrowind doesn't need such a massive overhaul as WAC-OE, Morrowind is already pretty good as it is (specially when taking into account how old that lady is), it just could be a little more spicy here and there. A perfect example - at least for me - is Vurt's Ashland Overhaul, it doesn't change each and every aspect of the Ashlands, it just carefully ads some stuff while keeping the original Morrowind spirit. And knowing your work from Oblivion, I am sure you will find the right balance. What I am seeing here already looks like you are on a very good way.

And the hoods look cool, saw them in that overview. I could imagine them on Ashland tribes like the Urshilaku.
Top

LoL the one on the right looks like he just saw his own brain on the floor.

( Weird sentence i know, but still.

)
Yeah there will always be people who are so * begin sarcasm * brilliant * end sarcasm * that they do not see how stupid they actually are.
Top

This is getting closer to deciding whether I'll install the game again, and actually play it.

It's been years since I looked into what the Morrowind modding community is up to so I imagine there's a lot to discover and with these new goblins and other critters coming along, and other things I've been missing, it may be time to think about it.

Some humans would do anything to see if it was possible to do it. If you put a large switch in some cave somewhere, with a sign on it sayingEnd Of The World Switch PLEASE DO NOT TOUCHthe paint wouldn't even have time to dry. Terry Pratchett
Top
Post Reply
38 posts